Top UN official: Its not too late to curb AI-powered weapons

Theres still time to stop the march of killer robots.

Thats the view of the U.N.s disarmament chief, who argues that a key forum trying to agree on banning or restricting autonomous weapons powered by artificial intelligence is making progress and deserves more time.

For many officials, activists, diplomats and soldiers, an agreement to ban weapons that find and kill targets on their own is vital to preventing a terrifying future in which humans could lose control of life-and-death decisions.

A coalition of dozens of countries and NGOs has declared it is not impressed with efforts so far to bring lethal autonomous weapons (LAWS) — dubbed “killer robots” — into the U.N.s Convention on Certain Conventional Weapons (CCW).

But Izumi Nakamitsu, the United Nations high representative for disarmament affairs, told POLITICO in an interview that the talks could still agree on key measures in the next couple of years.

“The incremental gains achieved to date are not impressive” — Mary Wareham, the coordinator of the global Campaign to Stop Killer Robots

“We hope that within the next two years, the CCW will have progress in terms of exactly how to restrict what parts” of the weapons, Nakamitsu said during a recent visit to Brussels. She noted that U.N. Secretary-General António Guterres “has taken a very strong position on this — he thinks that Lethal Autonomous Weapons Systems should be banned.”

Nakamitsu acknowledged that “the discussions are not on the level that was desired in terms of scope.”

But she rejected suggestions that the talks have stalled, pointing to a list of 11 guiding principles agreed in Geneva last year. She argued that negotiations have entered “a new process and there are actually quite a lot of informal discussions taking place.”

Talks over a ban began at the U.N.s weapons forum in Geneva back in 2014. Since then, they have repeatedly been slowed down by the resistance of major military powers including Russia and the U.S. 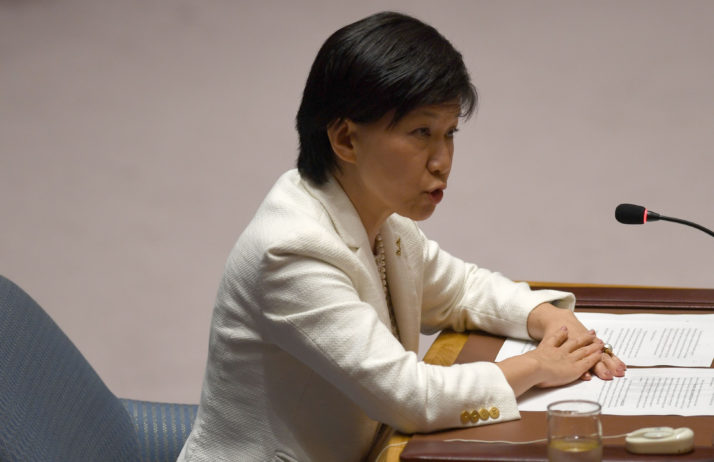 “The incremental gains achieved to date are not impressive,” said Mary Wareham, the coordinator of the global Campaign to Stop Killer Robots, an alliance that has gathered the support of 30 countries, over 140 nongovernmental organizations and the European Parliament for a ban on the weapons.

Activists and AI scientists warn that the slow-moving diplomatic efforts are being outpaced by rapid advances in technology that allows manufacturers and governments to build ever more sophisticated weapons.

The two-year time horizon mentioned by Nakamitsu may represent the last chance to achieve a meaningful deal, according to Frank Sauer, a political scientist at the Bundeswehr University in Munich who has followed the negotiations since their onset.

A milestone review conference of the CCW is scheduled to take place in December 2021.

“All players now agree that something tangible needs to be produced within the coming two years — otherwise it could be too late,” Sauer said. “Its crunch time for the CCW.”

No country has openly admitted to developing killer robots. But experts see strong indications that the U.S., Russia and China, as well as South Korea, Israel, the United Kingdom and perhaps other nations such as Australia, Iran or Turkey are working on weapons that use AI and other technology to select and engage targets autonomously, and which could soon outperform existing military technology at only a fraction of the cost.

Currently, no legal barriers hold back governments, companies or non-state players when it comes to the development of such weapons.

Activist Wareham welcomed Nakamitsus call for action but noted that the next official U.N. meeting in Geneva will not take place before June, calling that “an unacceptably long period for multilateral inaction on this challenge, especially when military investments in artificial intelligence and emerging technologies are bounding head.”

Against this backdrop, advocates of a ban have begun to consider other avenues.

Warehams campaign is mulling the merits of a vote for a treaty banning LAWs in the U.N.s General Assembly. Unlike in Geneva, where a consensus is needed to move forward, only a majority of votes would be needed in New York.

“I am the first one to say that those efforts have been successful” — Izumi Nakamitsu, the United Nations high representative for disarmament affairs

Nakamitsu stressed she was not taking sides in the debate. But she noted no country has so far suggested putting a ban on the aRead More – Source

[Update] GDC postponed to later in 2020 amid coronavirus cancellations

More than 2,200 agencies and companies have tried Clearview, report finds

Stealing advanced nations Mac malware isnt hard. Heres how one hacker did it