Decorative pavements in the floor of a recently unearthed Roman house in Pompeii offer a glimpse into the life and work of an ancient land surveyor. The pavements depict a stylized drawing of an ancient surveyors tool called a groma, along with a diagram of a surveying technique and the plan of a construction project in Pompeii. So far, theyre the only original Roman illustrations of the tools and techniques the Romans used to help build an empire and its infrastructure.

Only a few metal fragments of a Roman groma exist today (also recovered from Pompeii), and archaeologists have found only a few images carved into surveyors tombstones. Otherwise, we know the tool only from descriptions in medieval versions of ancient Roman surveying manuals.

The newly unearthed pavements at Pompeii suggest that those medieval copies were pretty close to the original ancient texts. An image on the floor of the entrance hall is nearly identical to illustrations in medieval copies of Roman texts, attributed to Roman surveyor Hygius and famed architect Vitruvius.

Colored tiles laid into the crushed terracotta pavement depict a circle with a square drawn inside. Lines divide the square into eight equal sections. In Hygius and Vitruvius texts, the image illustrates how to orient a building to one of the cardinal directions. On the floor of the house, the image shows how the house is oriented in relation to the four cardinal directions: one of the lines points along the length of the house, which faces northeast. Meanwhile, the corners of the square point north, south, east, and west.

The image would have immediately told Roman visitors who owned the house and where he had earned the money to build it. By modern standards, thats an odd choice of welcome mat, but wealthy Romans often decorated the floors and walls of their homes with images of their professions. Thats why archaeologists think the house may once have belonged to a land surveyor.

Tool of the trade

In a passage connecting the central atrium of the house to the garden, archaeologists found two more decorative images worked into the pavement. One seems to be the stylized image of a groma. Ancient Roman land surveyors and architects would have used a groma to divide farmland into carefully measured parcels called centuriations, to plan developments in cities like Rome and Pompeii, and to lay out the courses of aqueducts and roads.

For some reason, Hygius and Vitrivius didnt include illustrations of a groma in their texts, so modern scholars have to rely on their descriptions and on fragments of a real groma found at Pompeii. The instrument consisted of a set of crossed arms balanced at the end of a horizontal pole so they could spin freely around the center. Four weighted plumb lines hung from the ends of the arms. A Roman land surveyor would line up two of the plumb lines on a distant point and then use the four arms of the groma to calculate an angle in relation to that line.

That seems to be whats depicted in the pavement: a cross in a circle, at the top of a long straight line. “The artist had the problem of representing a three-dimensional object on a flat surface and with a relatively crude means of expression but succeeded in showing the fundamental fact,” wrote Massimo Osanna, director of the Pompeii archaeological site, and his colleagues in a recent pre-print paper. The rudimentary image might not scream “groma!” on its own, but in the context of other images related to surveying, it seems likely. 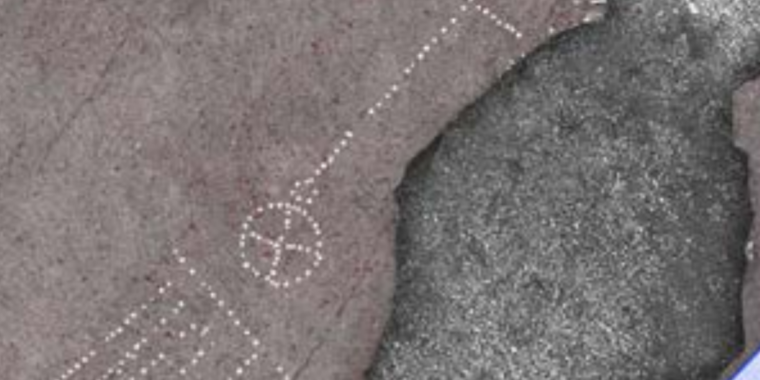 A person of unconventional taste

On the other side of the passage, an even more enigmatic design decorates the pavement: a set of four parallel lines, bracketed on two sides by an L-shape. According to Osanna and his colleagues, its a 1:300 scale schematic of an insulae, or apartment block, constructRead More – Source