After being sworn in as president for the fourth time, Vladimir Putin told Russian citizens that he saw a major economic breakthrough to prosperity as the main goal, adding that only a truly free society is capable of such step.

Putin thanked the Russian people for their support and said that he felt a tremendous responsibility for every citizen and the country as a whole. He also thanked voters for their record level of support at the March 18 presidential elections.

The president said that he considered it “his duty and the meaning of his whole life” to do everything for Russia, for its peaceful and prosperous future, for the preservation of the Russian people and for happiness of every family.

To achieve these goals Russia needs to be modern and dynamic, to quickly respond to all challenges, in order to strengthen its positions in the global economy, Putin noted. He said that the objectives would be set in the near future and the solutions that would lead to meeting those objectives will become historical milestones that would determine the fate of the nation for decades to come.

Putin emphasized that he was deeply convinced that only a truly free society was capable of such achievements, as such a society can easily incorporate everything new and progressive and rejects all that is unjust, inert and weighed down with unnecessary bureaucratic procedures.

“It is the harmonious unity of a free citizen, a responsible civil society and a powerful and responsible democratic state in which I see the solid foundation for Russias future development,” the president said.

He also noted that Russian citizens had realized that, while their country is changing together with the modern world, it should not forget its own roots, history and the multi-ethnic culture.

Putin stated that Russia had become an active, powerful and influential player in international politics and that the countrys security and defense potential was as strong as ever. He promised that he and other senior officials would pay primary attention to these issues in the coming years. He also said that Russia would support equal dialogue with foreign nations, promote mutually beneficial joint projects and deepen the ties with the interested countries in the business, humanitarian, cultural and scientific spheres. 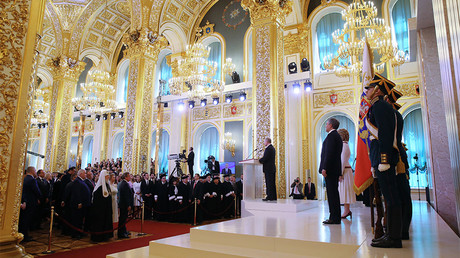 “Our main goal that Russia, the country of opportunities for its people, allows for self-realization of every person” Putin said, adding that he personally saw a deep connection between the major nationwide objectives and the tasks that ordinary people set before themselves on a daily basis.

“We need to expand the freedom space for the entrepreneurs and scientists, for people of creative professions and active citizens, for all who strive for a renewal. I see this as a guarantee of a succession of our political course and stable development of Russia,” he said.

Putin concluded his speech by expressing his confidence that Russia and its people would succeed in a new breakthrough, like has already happened throughout history, noting that a good team could solve the most difficult of all tasks.

“We will definitely succeed! I believe that it will be so. I will do everything that is in my power for this,” he said.

TV still main source of news for Russians, but only half believe it April 18, 2018