As governments around the world turn to tech to track the spread of coronavirus, some people are finding out the hard way that tracking tools can expose their private lives.

In South Korea — where the state pings peoples phones about the location of infected patients — one man was publicly pinpointed at a class about sexual harassment. In another case, an infected man was located in an area renowned for prostitution, according to the Guardian — leading to a hail of online jeers about his behavior.

Think this could never happen in privacy-conscious Europe?

As EU states rapidly scale up efforts to contain the outbreak, including the lockdown of an entire country and bans on public gatherings in several others, researchers at a German medical school are developing a tracking app based on the one used in South Korea.

Already, top EU health officials are calling for better use of personal data to fight the outbreak.

While the developers insist their version will bake in more data security, privacy activists are already voicing concerns about where the data will end up. The involvement of Hamburg-based software company Ubilabs, which described itself as a “longstanding Google Cloud Premier Partner,” has led some to fear that Google is one eventual destination.

Other tech solutions, which smack of surveillance, are fueling concerns that invasive “emergency” measures could be made permanent once the worst of the outbreak passes.

“While resources for public health are scarce, governments around the world should not see this health crisis as an opportunity to invest in controversial technology and systems for surveillance,” said Estelle Massé, a senior privacy policy analyst at civil rights outfit AccessNow.

In China, where the virus is believed to have originated, people are required to download apps that not only score them based on their contagion risk but also share information with the police, while a company has developed software designed to identify people even when they are wearing hygienic face masks. 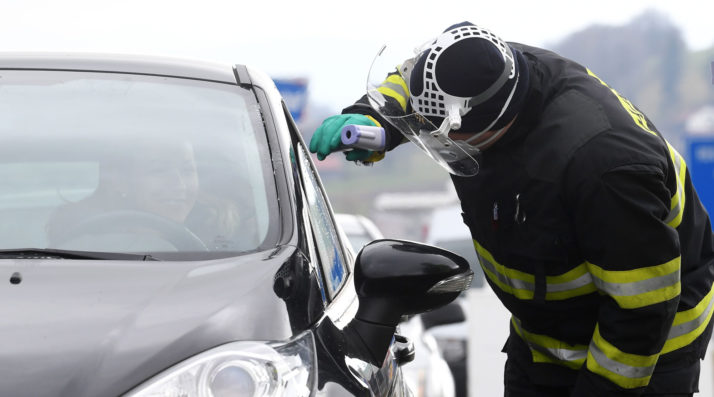 In Singapore, the government has created detailed logs documenting where diagnosed patients have gone and with whom they have interacted, while authorities in Taiwan have combined several public databases to predict cases of the virus, as well as used phone tracking to monitor whether people are abiding their quarantines.

Closer to home, Russia is using facial recognition to check if people break quarantine. “Compliance with the regime is constantly monitored, including with the help of facial recognition systems and other technical measures,” Moscows mayor wrote on his website.

As the outbreak in Europe worsens, the temptation to mimic such techniques will grow, testing the limits of peoples attachment to privacy in a part of the world that has elevated data protection to the status of a “fundamental right” and touts its rule book, the General Data Protection Regulation (GDPR), as a model for the world.

Already, top EU health officials are calling for better use of personal data to fight the outbreak.

Romanian Health Minister Victor Costache has urged countries to make better use of telemedicine to check peoples health status, but also to use GPS tracking to keep them contained if they are quarantined.

The Robert Koch Institute, the German federal governments disease prevention agency, is considering using the mobile phone data of people diagnosed with coronavirus to find potential contacts and predict the spread of the disease.

The GDPR allows for divergence from the rules in matters of public interest.

In Ireland, privacy experts discussed on a podcast whether it is worth handing over Google passwords to stop the spread of coronavirus.

Such calls are prompting pushback from the blocs privacy authorities, which insist that Europe should hold firm on its principles.

Germanys federal data protection commissioner has said that plans to use mobile phone contact data to track disease carriers could represent “a massive invasion of privacy,” while the privacy regulator in Italy, the European country worst affected by the outbreak, has urged employers against a “do-it-yourself” apprRead More – Source

Millions of documents from >200 US police agencies published in “BlueLeaks” trove June 23, 2020

NSAB comes up with traceability to help Whatsapp July 1, 2019

The Aeronauts brings the joy and perils of Victorian ballooning to vivid life December 8, 2019