The most powerful storm to hit the Bahamas since records began has torn off roofs and caused severe flooding.

The slow-moving, category five Dorian – the second-strongest Atlantic hurricane on record – is now packing sustained winds of up to 165mph (270km/h) and may cause a storm surge of up to 23ft (7m).

There is no official word on casualties but the Red Cross fears some 13,000 homes have been damaged or destroyed.

The hurricane is moving slowly west, with the eastern US coast at risk.

The US states of Florida, Georgia, North and South Carolina have all declared states of emergency.

What's the latest from the Bahamas?

The US National Hurricane Center (NHC) said that at 10:00 GMT, Dorian was moving very slowly through Grand Bahama, having made landfall earlier on the Abaco islands, which are just to the east.

Both chains are in the north of the Bahamas archipelago. Grand Bahama, with a population of about 50,000, is only 100km (60 miles) east of West Palm Beach in Florida.

Dorian is travelling west at just over 1mph (2km/h).

The NHC said the hurricane would "continue to pound Grand Bahama Island" through much of the day and evening on Monday.

There was little information overnight from the affected Bahamas islands amid power cuts and limited internet access.

However, video and tweets posted by Latrae Rahming, a former aide to ex-PM Perry Christie, showed severe damage on the Abaco Islands, home to about 17,000 people, where landfall was first made with sustained winds close to 185mph.

Cars have been flipped over and roofs torn off.

Mr Rahming told the BBC it was as though a tornado had swept through Marsh Harbour on the Abacos, with a surge as high as a two-storey building bringing intense flooding.

He said he feared for one shanty town area that houses about 1,500 people.

One video as the storm hit the Abacos carried a desperate plea for help:

High winds and torrential rainfall have also struck Grand Bahama. The Tribune website reports that Grand Bahama International Airport is said to be under water.

Kristoff Ayala-Strachan, a blogger in Freeport on Grand Bahama, told the BBC he had stacked up on supplies and shuttered the windows, and was expecting the storm to last at least two days. The 24 year old said this was his eighth major hurricane.

Joy Jibrilu, director general of the Ministry of Tourism and Aviation, said on Sunday afternoon: "It's devastating. There has been huge damage to property and infrastructure. Luckily, no loss of life reported."

However, Eyewitness News later carried an interview with a grandmother who said her eight-year-old grandson had drowned on the Abaco Islands.

The government has opened 14 shelters and names dozens of churches, schools and other buildings on its official lists of emergency shelters.

But as sites become full, there is concern that people will be forced to take refuge in other places that aren't listed to receive food and water from the government.

How has the Bahamas prepared?

The country is one of those most regularly hit by hurricanes, and homes are required to be reinforced to withstand the winds of a category four storm.

Prime Minister Hubert Minnis did announce an evacuation order for parts of Grand Bahama and the Abaco Islands. All tourists were asked to leave.

But officials expressed dismay that some people had chosen to stay.

Mr Minnis said: "I can only say to them, that I hope this is not the last time they will hear my voice and may God be with them."

The visibly upset prime minister said in a news conference on Sunday: "This is probably the most sad and worst day of my life. We're facing a hurricane… that we've never seen in the history of the Bahamas."

What about the US?

Although Dorian is currently heading westwards, it is forecast to make a gradual turn north or north-west, taking it along the eastern US seaboard, making its landfall point, if any, uncertain.

The NHC said that Dorian's slow weakening would continue, but it would remain "a powerful hurricane during the next couple of days" and would "move dangerously close to the Florida east coast" on Monday night through to Wednesday evening.

He told reporters on Sunday that the storm "looks monstrous" and the US east coast would "be ultimately impacted and some of it very, very severely".

Dorian has grown larger in size, with hurricane-force winds extending up to 45 miles (75km) from the storm's centre.

President Trump has issued a federal state of emergency for Florida, and the state's governor, Ron DeSantis, has activated 2,000 National Guard troops, with another 2,000 on standby.

Mr DeSantis warned people not to be complacent following the change in the storm's predicted path. "This storm at this magnitude could really cause massive destruction," he said. 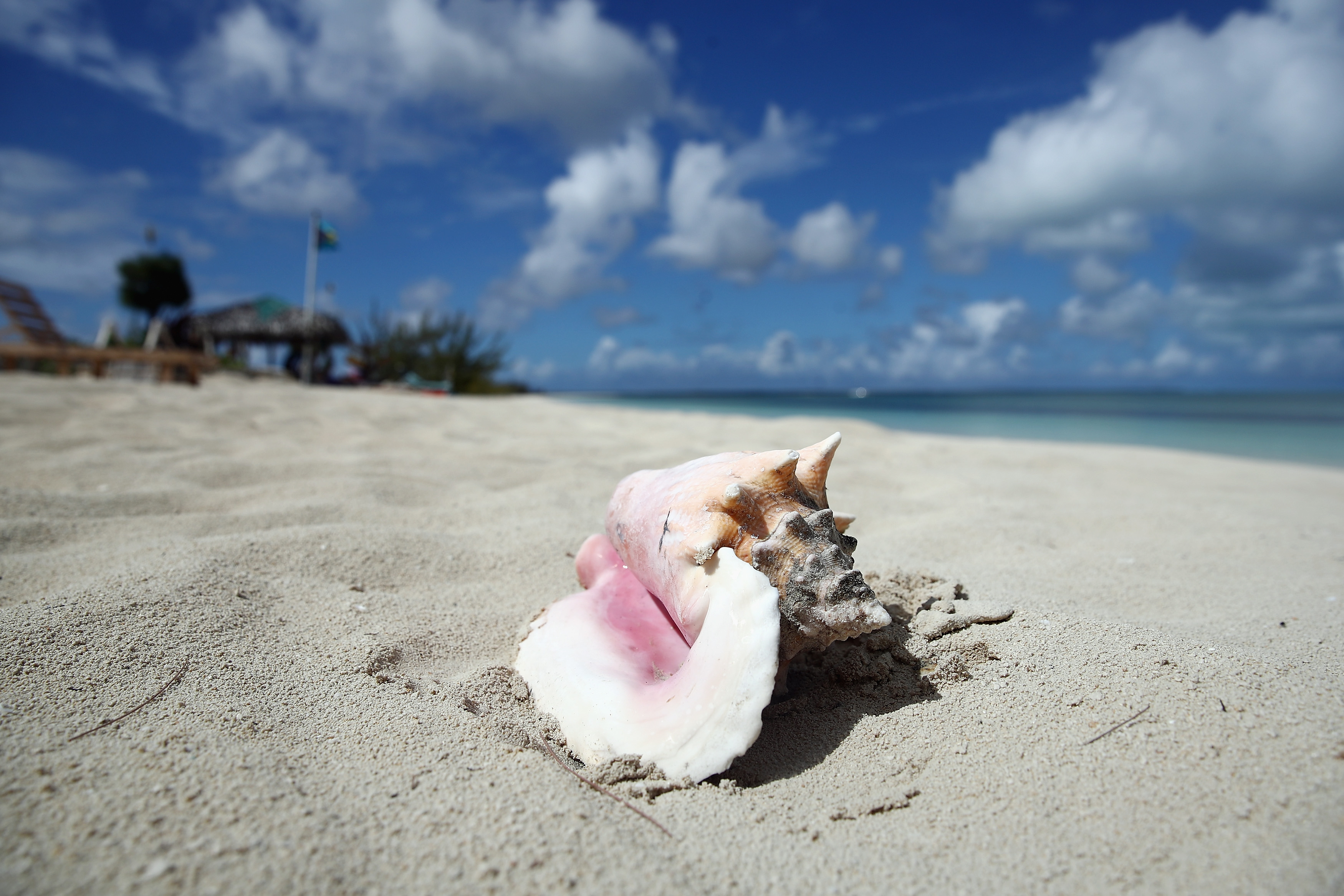 Commonwealth of the Bahamas

Popular attractions, including Disney World in Orlando, have said they are "closely monitoring" the storm. Miami has ordered the removal of electric rental scooters from the streets to avoid them becoming projectiles.

South Carolina on Sunday issued a mandatory evacuation of the entire coast, effective of noon on Monday and affecting 830,000 people. Georgia then followed suit.

Scientists cannot say whether climate change is increasing the number of hurricanes. Although 2018 was the third year in a row of above-average storms in the Atlantic season, years can vary widely.

However, many do believe climate change is affecting the severity of the storms.

This is for two main reasons.

Firstly, an increase in sea surface temperatures strengthens the wind speeds within storms and also raises the amount of precipitation a hurricane will dump.

Then there is the issue of rising sea levels. They are expected to increase by one to four feet over the next century, bringing the potential of far worse damage from sea surges and coastal flooding during storms.

The warming world is also making storms more sluggish. Over the past seven decades tropical events have slowed, for example going 20-30% less quickly over land in North America.

Use our guide to see how these deadly storms form, their devastating effects and how they are measured:

A guide to the world's deadliest storms

Hurricanes are violent storms that can bring devastation to coastal areas, threatening lives, homes and businesses.

Hurricanes develop from thunderstorms, fuelled by warm, moist air as they cross sub-tropical waters.
Warm air rises into the storm.

The storm rotates due to the spin of the earth and energy from the warm ocean increases wind speeds as it builds.

When winds reach 119km/h (74mph), it is known as a hurricane – in the Atlantic and Eastern Pacific – or a typhoon in the Western Pacific.

The central eye of calmer weather is surrounded by a wall of rainstorms.
This eyewall has the fastest winds below it and violent currents of air rising through it.

A mound of water piles up below the eye which is unleashed as the storm reaches land.
These storm surges can cause more damage from flooding than the winds.

"Urgent warning about the rapid rise of water on the SW FL coast with the passage of #Irma's eye. MOVE AWAY FROM THE WATER!"
Tweet from the National Hurricane Center

The size of hurricanes is mainly measurRead More – Source

In State of the Union, Trump Celebrates Islamic State Win While Ignoring Kurds Who Made It Possible February 1, 2018

Forest freehold is available as a whole or in three lots May 11, 2018
Previous Post Hong Kong protests: Students boycott class on first day back
Next Post First picture of Texas gunman who killed 7 and injured 22 during mass shooting