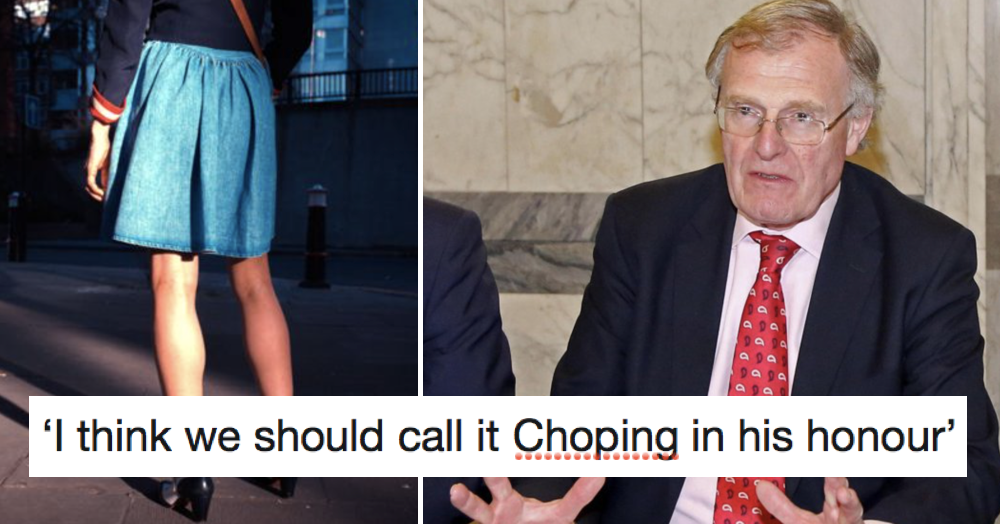 Plans to make upskirting a criminal offence have been blocked by a single Conservative MP (with the help of one of his Conservative colleagues).

The upskirting bill was blocked at the last minute by Christopher Chope after being intentionally pushed back by Philip Davies filibustering. As it was blocked, another MP yelled Shame!. Shame indeed. There arent enough walls to kick.

If you want to know what kind of person would block legislation making it a specific criminal offence, then here are a few things you might not know about Tory MP Christopher Chope.

If you're wondering what sort of person blocks legislation to ban upskirting, this was Christopher Chope's attitude to Hillsborough pic.twitter.com/gQhtnpjhtS

So glad that there Christopher Chope and Philip Davis are proudly standing up for the right of British perverts to photograph underneath women's skirts. A

Christopher Chope (the MP that objected) also objected to the Alan Turing Pardon and the Hillsborough debate. https://t.co/JR0jr5ofhu

Christopher Chope has blocked the upskirting laws at the last minute. An unquestionable act of misogyny. How could anyone hate women so much that they would want it to be legal to take pictures of her genitals without her consent?

I can only assume we now know what Sir Christopher Chopes main hobby is. I think we should name it Choping in honour of him https://t.co/o8yaVIZDlu

Who me? Oh I'm just off to take hundreds of pictures of Christopher Chope's tiny weasel dick with a spy camera & complete impunity to see how he fucking well likes it the utter c*nt.

I am unspeakably angry. If you feel the same, please email Christopher Chope [email protected] and ask him why he thinks men should be allowed to photograph women's genitals without their consent.

I'm sure Christopher Chope MP won't mind people knowing he exercised his democratic right and objected to a bill that protects women from sexual assault by cowardly perverts. https://t.co/mfQ4OJtEwe

Sir Christopher Chope has derailed the parliamentary bill to criminalise up-skirting, and quite right too, because its a slippery slope and the next thing you know the ladies will be drinking beer and demanding the vote and whatnot.

A bill to make upskirting an illegal offence was blocked by a Tory MP. Taking a picture/video up a womans skirt… without consent. It takes one objection to stop a bill getting a second reading. Why would anyone NOT want this criminalised? Christopher Chope best explain himself pic.twitter.com/osbKLv9UyX

If you bump into MP Christopher Chope feel free to take photos of him without his consent, maybe then he could begin to imagine what's its like to be violated by a camera up your skirt. To save you the google, his email address is [email protected]

Property with a connection to Robert the Bruce is offered for sale April 29, 2018

‘It is easier to score against Brazil than against Sweden’: Eriksson July 1, 2018

David Davis MP explained why referendums are dangerous in 2002 and it has a certain irony considering Brexit December 14, 2017

Forest freehold is available as a whole or in three lots April 9, 2018
Previous Post Most jaw-dropping story of the week
Next Post All you need to know about the Tory MP who blocked upskirting becoming illegal